Traditional teaching methods encouraged the memorization of the multiplication facts – all 121 of them (169 if we include the 11s and 12s). I can still recall as a young child parroting off my multiplication facts. If you’ve ever tried this with your class, and no I don’t recommend it, you’ll find you have a handful of kids who know their tables and will lead the rest. Those who have no clue will just be mouthing along hoping you don’t hear them – not a nice way to build confidence with math. Multiplication is introduced informally in Year 2 through making groups, arrays and with skip counting.

Then year 3 comes around and kids begin to learn and memorize the facts. Rather than learn them through parroting (or mouthing) the tables we need to provide our kids with plenty of fun learning activities to consolidate the facts and enhance the memorization of them. After all fact fluency is the aim.

Of course, we need to follow a sequenced approach to teaching the facts, definitely not one that follows numerical order PLUS kids need to know the strategies that help them master each and every fact. I’ve put a whole heap of multiplication resources into this bundle which your kids are going to love. No more boring worksheets! And of course, the thinking strategy and best sequence to follow when teaching the facts are definitely included. Out of all the activities and games in the bundle, I have to say Find the Answer is my favorite. I use it all the time and the kids I’m teaching love it. It’s easy to use and it’s way more exciting than a normal worksheet.

You know the kind I’m talking about – the ones where kids have to answer rows or columns of tables. Yuck! I taught high functioning children with Autism for 10 years and if I gave them a sheet like that – well let’s just say the chances of it being completed without an incident were slim. That sort of activity is so uninspiring and definitely isn’t going to improve anyone’s attitude to math. With this multiplication activity, I love that kids aren’t just writing the answer but they are also recording the facts – up to three times. The more they write the same fact the more they’ll start to memorize it. And let’s face it – that’s the aim.

Another activity I use is Multiply and Find the Answer. It’s a great interactive worksheet which can be played individually or used as a partner game. Kids spin a multiplication fact and then write it in color above the answer. Once again they’re writing out the number fact which helps with fact retention. The player who has the most equations completed in a row is the winner (if you’re using the sheet as a partner game) otherwise your kids keep spinning and answering until they have answered ten adjacent equations. Did I forget to say that each pack in the bundle helps consolidate each individual fact first from zero and one times (which are combined) to the twelve times tables and then a combination of facts?

Another game, Spin, Answer and Trace, can be used by one to four players. Players spin a fact and write it in the correct box in their column (for multiple players) or single players just write it the correct box in any column. The next time they spin the same fact they may trace the box around the equation. It’s victory for the column (or player) that has all the boxes traced first! Spin and Answer requires students to complete a row of multiplication facts and check it off if they spin that number. I use it as a partner game as well, with students claiming three dice first and coloring them in. If they spin one of their die numbers they complete the whole row of number facts. Whoever checks off three rows for their die first wins. Single players will keep answering the equations until they have each row completed. 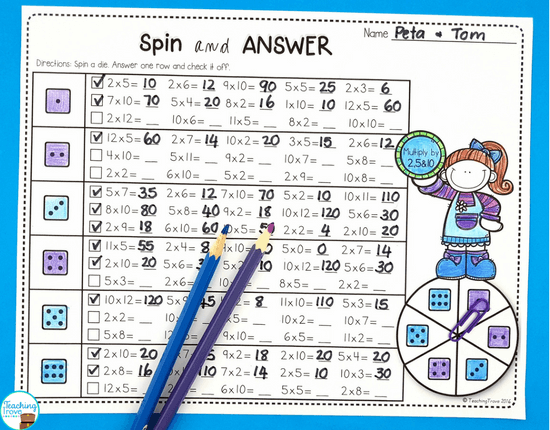 There is a bit of a theme here with spinning the equation. I really found my class loved the interactive nature of spinning a paperclip before they could write the answer. (Great for fine motor as well!) 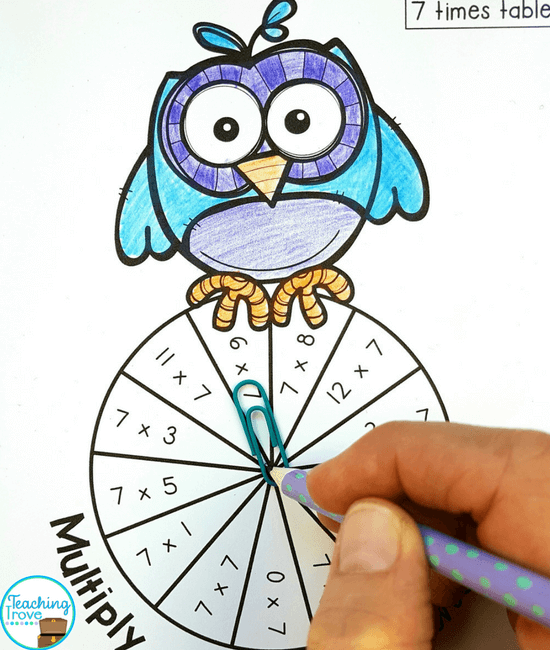 Four in a Row has both a color version for 2 to 4 players or a black ink version for single players. If students are playing it independently they will need a game marker. The student spins the spinner, moves their marker, and writes the product they land on under the correct equation. Each time they answer four facts in a row they color them in. Once again your kids will be writing the facts out multiple times. There is also a color copy of the group game. There’s no writing with those game, players just put their marker over the answer. 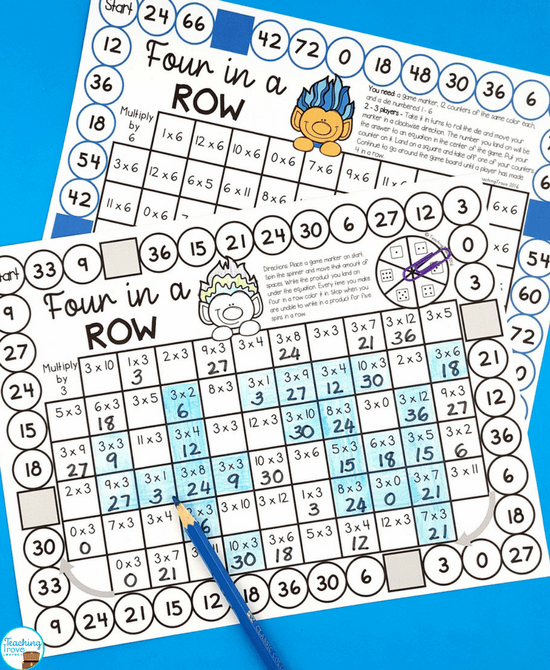 Spin, Trace and Color is a game format that I have used often. It’s sort of like a bump game but without counters. Colored pencils are used instead. When players spin a multiplication fact they trace around the answer. The next time they spin it they can claim the answer by coloring it in (even if they didn’t trace it). Kids love to ‘steal’ their partner’s fact. It’s great as an independent activity as well. 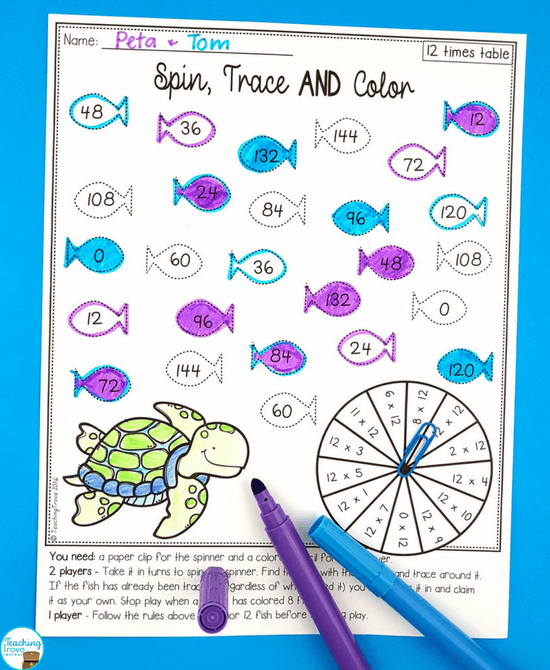 Another activity which is lots of fun is Make a Path. Students spin and write the number fact above the product. There’s lots of repetitive practice with this worksheet but because the aim of the activity is to make a path from the top of the sheet to the bottom, your kids won’t even realize that they’re working hard at recalling their multiplication facts. Math Homework can be Fun!

Now if you like to send math homework home, multiplication homework games are perfect. They not only give kids a great way to practice the facts at home but they also let parents know the mental math strategies you’re using to help your class memorize the facts.

Each game will focus on a single strategy and has a fold-over section which hides both the thinking strategy and the answers. Kids write down each equation they land on so you know the homework has been completed plus by writing the facts they are learning them. This bundle is growing and I’ve added new center games with more to come. 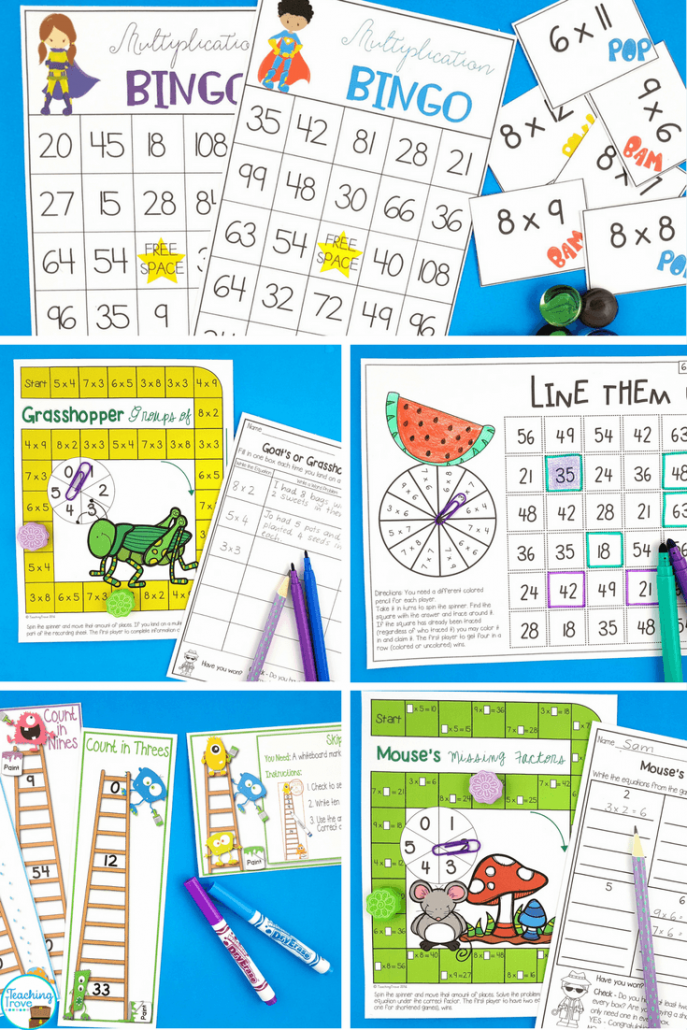 I’ve also included my math flip books (you can read about them here). Flip books focus on not just skip counting, repeated addition, arrays and understanding groups. But also, they introduce a thinking strategy to use when answering the multiplication facts. With this bundle, you’ll have all the multiplication facts covered. And as an added bonus you’ll have happy kids! Isn’t that what we all want?

If you would prefer to purchase from our store on Teachers Pay Teachers, please click this link. 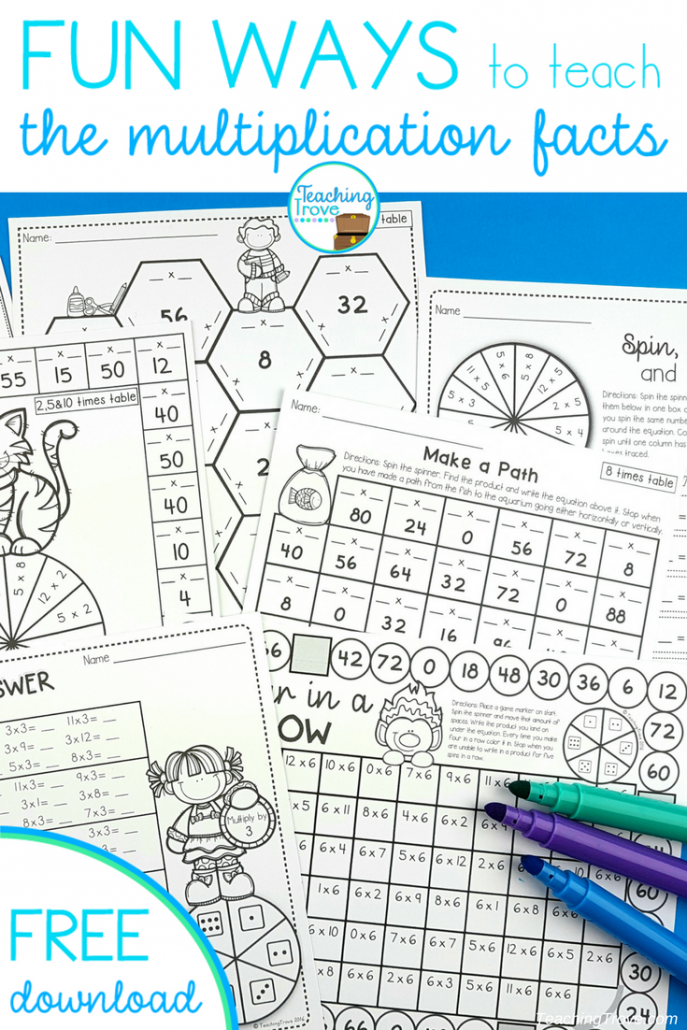 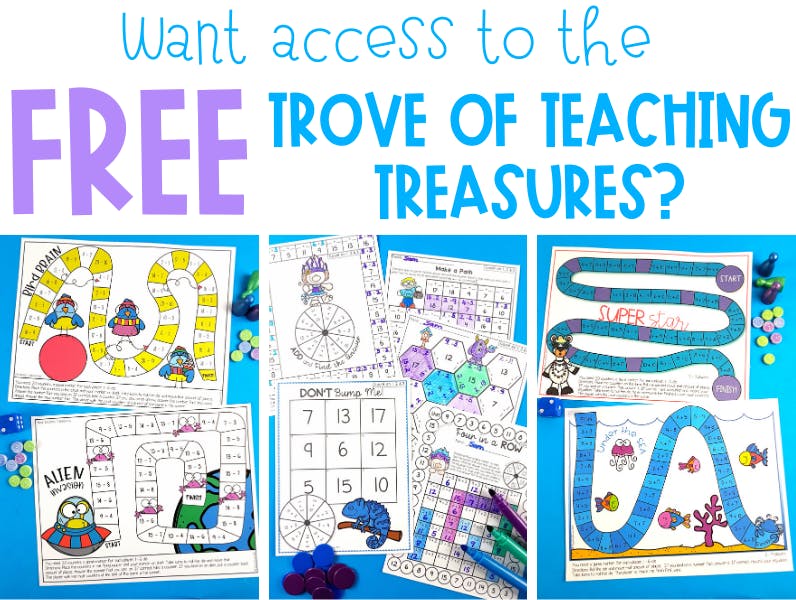